The HiSeas Free-Floating Offshore Wind Turbine (FFWOT) Platform provides a low cost, low-mass, and stable platform for turbines up to 40 MW. Stability is provided even in the roughest ocean, including the gales of the Southern Ocean or a Category 5 hurricane, cyclone, or typhoon. This has been proven in a 200:1, 400 W working scale model which demonstrated stable platform operation with waves that scale to 60 meters, which is twice the height of the largest recorded wave. 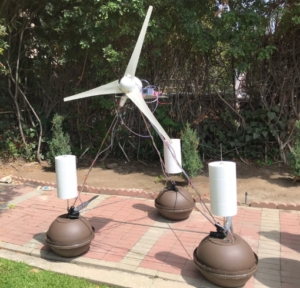 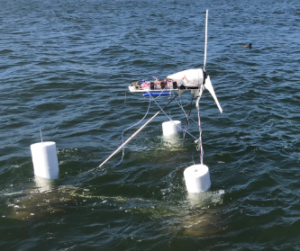 This extraordinary stability of the HiSeas platform results from several factors, including a tripod structure, a deep base that is below most wave motion, and a unique “suspension” system that both supports the turbine/platform mass and isolates it from the highest seas.   The latter uses “stabilizer spheres” which enclose huge volumes of deep, still, sea water for inertial mass, and pivoting floats which move laterally with the waves, yet have very little up and down (heave) motion owing to the large mass of the stabilizers and minimal compliance of the floats.   This stability minimizes structural loads on the turbine support structure and eliminates fatigue damage caused by wave motion and allows the use of off-the-shelf turbines meant for fixed platform offshore installations.

Energy delivery to shore may be by ocean floor AC or DC power cables in the case of low to medium range offshore turbines, or by hydrogen-rich liquid fuels such as Liquid Organic Hydrocarbon Carrier (LOHC), with hydrogen supplied from electrolysis of water as powered by turbines on the HiSeas Platform, located anywhere on the world’s oceans.    Each large electrolysis/LOHC platform may be attached to dozens of HiSeas Turbines via ocean bottom power cables, with tankers delivering the LOHC to the world’s markets.